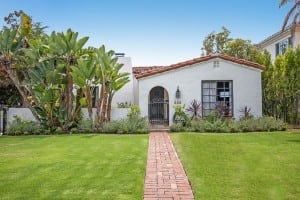 Most people cannot really afford to buy a house in Los Angeles. But that means that some people can afford to buy a house. And logic dictates that some of those people must be able to afford to buy really expensive houses. Who are those people? No one knows. Where do they buy houses? Well, our pals atPropertyShark have provided us with a list of the priciest Los Angeles neighborhoods of 2014, calculated using the median sales price for all residential sales, and the most expensive neighborhood of the year wasn’t Bel Air or Beverly Hills (though they both made the top 10), but the fancy North of Montana section of Santa Monica.

Santa Monica was the surprise most-expensive with a median of $3.1 million, but Manhattan Beach had the craziest year, with the list’s highest prices per square foot in its El Porto and Sand Section ‘hoods (that means it has smaller places selling at higher prices). El Porto and MB’s Hill Section saw the largest leaps in home prices; the former was up a difficult-to-believe 54 percent over 2013 and the latter was up by a full third. Meanwhile, poor Beverly Hills is the only place on the top 10 to see prices drop over 2013; they were down seven percent, to a totally laughable $2 million.

This list does not at all track with the biggest house sales of last year, most of which were clustered in Holmby Hills and Bel Air.